Metrology and Standards for Nanoscale Stress

Our objective is to develop accurate measurement methods for the nanoscale stress distributions and surface defects that control device performance and reliability (performance over service life) in microelectronic and micro and nanoelectromechanical systems (MEMS and NEMS). Such methods will enable manufacturing processes to be optimized for device performance and lifetime, and address a critical measurement need in the MEMS industry, i.e., 90 % of MEMS customers require a demonstration of device reliability, but only 50 % of vendors provide one.

We will develop piezospectroscopic- and diffraction-based methods that accurately map nano-scale stress distributions in Si and other materials. Method development will focus on the use of super-resolution confocal Raman microscopy (CRM), electron back scattered diffraction (EBSD), and high-resolution X-ray diffraction (XRD) to identify and measure the stress distributions of structures and defects that control electrical and mechanical performance and reliability. Calibration of the Raman piezospectroscopic coefficients will be performed using the known stress fields of special test structures, indentations, and cracks. Polarized CRM methods will be developed in concert with special test structures to enable the entire stress tensor to be determined. The CRM measurements will be correlated with EBSD measurements on small-scale test structures and with XRD and curvature measurements on large-scale thin-film on substrate systems. A large-sample measurement system will be developed so that stress maps of 200 mm wafers can be generated for comparison with commercial wafer curvature tool measurements. Broadly-applicable standard reference materials for stress measurement will be developed.

More detailed coverage of Group projects related to the above-mentioned research is available through the following links.

Stress field measurements in MEMS and NEMS devices will enable lifetime-limiting defects to be identified and hence processing to be optimized to increase device reliability.

Stress measurement by Raman scattering is based on measuring the shift of Raman phonon bands in materials under stress. A CRM scattering system has been developed with state-of-the-art stress and spatial resolution. Automated peak fitting routines enable shifts in the 522 cm-1 Raman peak in Si to be measured with approximately 0.02 cm-1 uncertainty, corresponding to measurement-limited stress precision of about 10 MPa (strains of about 10-4). Scans consisting of 128 x 128 hyperspectral arrays range from wide area, 150 µm x 150 µm, to small area, 5 µm x 5 µm, the latter giving rise to a pixel spacing of 40 nm. Each spectrum takes about 1 second, enabling a high resolution stress map to be generated in about 4 hr. Measurement development has focused principally on three aspects (using single-crystal Si test vehicles): (i) identification and quantification of the stress "signatures" of controlled, contact-induced defects in Si using micro- and nano-indentation techniques; (ii) verification of the scalar (tensor-averaged) piezospectroscopic coefficients through comparison with EBSD measurements, using the known stress distributions of indentation flaws and their associated cracks; and (iii) determination of the limits of the technique for measuring stress variations in engineered structures. Examples of (i) are shown in the figures on the previous page, which show rendered stress maps of a three-sided Berkovich nanoindentation on a Si(111) surface, spherical nanoindentations on Si(111), a four-sided Vickers microindentation on Si(001), and a linear wedge nanoindentation on Si(001) (top to bottom on the page, respectively). Red and blue indicate compressive and tensile stress, respectively, and the different signatures of the fracture and deformation patterns for the various defects are obvious: such information can be used to predict the behavior of the defects under subsequent loading. 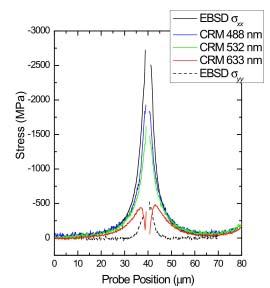 CRM and EBSD stress profiles across a wedge indentation in Si

Progress in (ii) has been marked by the quantitative agreement obtained between CRM and EBSD measurements, largely through the ability to probe different depths beneath a sample surface using different Raman excitation light, as shown in the stress profile figure for the wedge indentation. Stress measurement by EBSD is based on distortion of the diffraction pattern by strain in the crystalline lattice. A cross-correlation method has been developed that compares high-quality diffraction patterns (such as in the example figure) obtained from scanning electron microscope scans 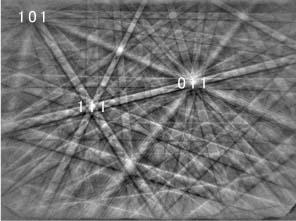 and produces stress maps with stress and spatial resolution comparable to those obtained with CRM. Agreement between the two methods was shown to be exact when surface-localized blue excitation was used for the CRM measurement.

Arrays of indentations aligned along different crystallographic directions were used in (iii) and an example is shown in the next figure. Clear differences in the local stress fields of the spherical indentations are visible. 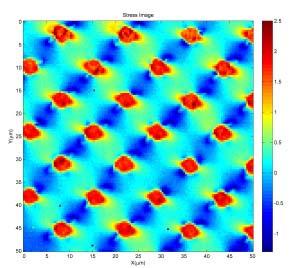 Strain Mapping and Simulation—We employ combined measurement and modeling to enhance understanding and capability of nanoscale strain-mapping via super-resolution confocal Raman microscopy (CRM), electron back scattered diffraction (EBSD). Stressed micro- and nano-structures are simulated via the finite element method. Simulations go beyond usual mechanical response and predict Raman spectra and diffraction pattern shifts. As the simulations and their inputs are improved and become more faithful to experimental measurements, we learn how to draw better inferences from nanoscale strain-mapping experiments, validate our understanding of how the measurements work and develop techniques to use simulations and measurements together to extract the most possible information.

Measurement of Interface Stress in Composite Nanostructures—NIST Nanomechanical Properties Group researchers have developed a scanning probe microscopy technique that allows the stress state at buried interfaces in nanostructures to be determined. The method was applied in the investigation of the mechanical properties of as-grown and oxidized Si nanowires (NWs) as a function of wire diameter. The wires were grown and oxidized by NIST Metallurgy Division researchers. From contact-resonance atomic force microscopy (CR-AFM) measurements, the effect of the compressive stress at the Si-SiO2 interface was revealed in the diameter dependence of the elastic modulus of Si NWs oxidized at 900 °C and 1000 °C, with diameters in the range 30 nm to 90 nm. A modified core-shell model that includes the interface stress developed during oxidation captured the observed diameter dependence. The magnitude of the compressive stress, about a few gigapascals, as well as the width of the stressed transition region at the Si-SiO2 interface, about a nanometer, agree with those reported in simulations and experiments. Diameter-independent values were observed for the elastic modulus of as-grown and fully oxidized Si NWs. For these NWs, the elastic moduli determined from CR-AFM measurements are in the same range as those found in tensile tests on single crystal Si NWs and three-point bending tests on amorphous SiO2 NWs.

Mapping of Strain Fields and Phase Distributions of Indented Si—In Raman-spectroscopy enhanced IIT, an indentation device that is coupled with a Raman microscope to conduct in situ spectroscopic and optical analysis of mechanically deformed regions of Raman-active bulk materials, thin films or fibers under contact loading. The experimental setup not only allows the collection of Raman spectra from individual spatial locations on the specimen of interest (Raman microprobe) but also the collection of Raman spectra over an entire image (Raman mapping). This collection of spectra is analyzed to yield spatial maps of material quantities that can be extracted from the Raman spectra including strain, crystalline alignment, phase, or composition. This technique gives the opportunity for in situ studies of the stress fields and phase distribution maps around indentations in Si and other semiconductor materials which is extremely valuable in evaluating and refining existing theoretical models in this field of research.