Measurements and Standards for Thermoelectric Materials

Our goal is to develop standard reference materials (SRMs), measurement methodologies, and comprehensive data sets (Seebeck coefficient, electrical conductivity, thermal conductivity) for thin film and bulk thermoelectric materials to enable the development of these materials for applications involving waste heat recovery and solid-state cooling. Our approach will facilitate comparison of thermoelectric data between leading laboratories, and accelerate the commercialization of these materials.

Our approach is to develop standard reference

We have accomplished three goals this year: completion of a standard reference material (SRM3451) for the low-temperature Seebeck coefficient (10K to 390K); development of a set of automatic screening tools for measurements of the thermoelectric properties of thin films; and crystallographic measurements of novel thermoelectric materials.

Based on the Seebeck coefficient round robin data generated from twelve laboratories on two candidate materials, Bi2Te3 and constantan (a Cu-Ni alloy), we have chosen Bi2Te3 as our prototype SRM. Certification measurements were performed using two different techniques (a steady state primary measurement, and a secondary transient measurement) on randomly selected samples. The certified Seebeck coefficient values are provided from 10K to 390K. The availability of this SRM will enable accurate instrument calibration, and therefore meaningful inter-laboratory comparison of data. SRM 3451 is expected to be available to the public in FY 2009. 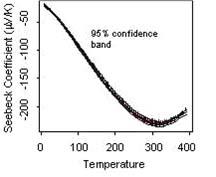 Measurements take as little as 20 seconds, to determine both the electrical conductivity and Seebeck coefficient at each sample point; thus, over a thousand points can be measured within 6 hours. 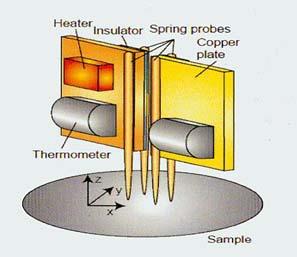 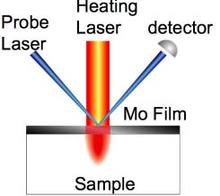 The measured value,11.96 J(Kms)-1, is within about 10% of the reported value of 12.87 J(Kms)-1. With the availability of this tool, future mapping of the thermoelectric figure of merit, ZT =S/pk, is possible.

Finally, in collaboration with the University of South Florida, and the Naval Surface Warfare Center, we successfully determined the local structure of Cu in a novel type-II clathrate, Cs8Na16Ge136-xCux, using X-ray absorption spectroscopy. 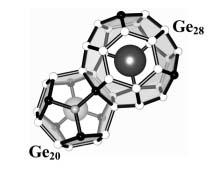 Cu was confirmed to dope preferably in the most distorted tetrahedral Ge site. Thus, it is likely that the values of S, p. and k. can be modified by doping.