As part of NIST's response to the Materials Genome Initiative (MGI), this project addresses conflicting reports of the diameter-dependence of elastic moduli of zinc oxide (ZnO) nanowires. A series of new molecular dynamics simulations are conducted to better understand the underlying cause of this conflict and to provide a better understanding of mechanical behavior of these nanostructures. 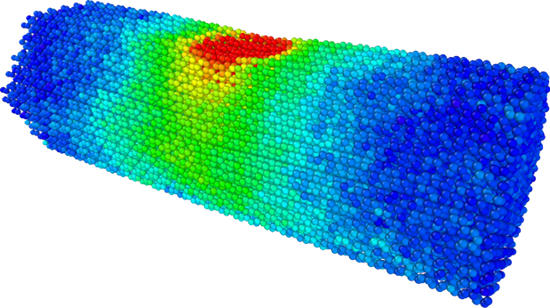 ZnO nanostructures hold tremendous promise for novel and versatile devices due to their demonstrated intrinsic semiconducting and piezoelectric properties, as well as the amazing structural diversity that can be achieved by current synthesis techniques.  ZnO nanostructures can take the form of nanowires, nanobelts, nanorings, and nanohelices. The ability to create such structures with predictable and reproducible measures of performance depends on having knowledge of the mechanical properties of ZnO nanostructures.

To address this concern, and in response to the MGI, researchers in the Nanomechanical Properties Group are performing new molecular dynamics simulations to better understand the variability in both the simulations and the experiments. To better understand the conflicting simulation results, we investigate the effect of implementation differences among the previous studies as well as previously ignored sources of diameter-dependence. To understand the variability among experimental results, we vary methodology while keeping most implementation details fixed and using identical sets of nanowires. In other words, molecular dynamics can measure the same nanowire under axial elongation, bending, radial indentation, etc. For the case of radial indentation, molecular dynamics also allows for rigorous evaluation of different indenter tips again using the same set of nanowires.

In conclusion, it is anticipated that this new project, launched as a direct result of the MGI, will provide a better understanding of nano-scale mechanical behavior and improve atomistic simulation techniques for studying such phenomena.