The Surface and Trace Chemical Analysis Group (STCAG) conducts both applied and fundamental research into the development, characterization, and analysis of various spectrometric platforms including ambient and atmospheric pressure mass spectrometry, secondary ion mass spectrometry, and ion mobility spectrometry. These analytical techniques provide a direct determination of the nominal mass and chemical identity of particulate, residue, vapor, and aerosol species. Mass spectrometry can also measure the spatial and temporal distributions of chemical species on solid surfaces and substrates. This program encompasses a wide range of technique development and standards production projects for a breadth of applications in material science, forensic chemistry, and security. 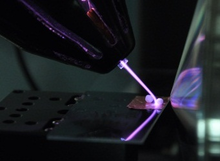 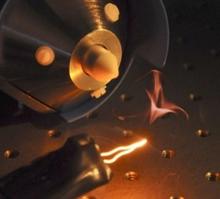 Thermal Desorption Ambient Mass Spectrometry decouples analyte desorption and ionization. Here, analytes are thermally desorbed directly from a primary surface or a wipe collection using conductive, convective, and/or radiative modes of heating. This mode has been implemented extensively in the trace detection arena for rapid and reproducible analysis of wipe-collected samples. 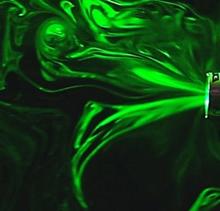 Secondary ion mass spectrometry (SIMS) allows the measurement of isotopic, elemental, and molecular information from the surface of solid samples. A high energy “primary” ion bombards the surface and induces a collision cascade, liberating “secondary” ions that are then sent to magnetic sector or time-of-flight mass analyzers for detection of ions.

Magnetic Sector SIMS generates isotopic and elemental information from solid surfaces with depth profiling capabilities to measure the concentration of isotopes and elements as a function of depth into the film.

TOF-SIMS employs a pulsed primary ion beam and a time-of-flight mass analyzer for the detection of molecular ions with mass-to-charge ratios ranging from m/z 1 to m/z 10,000 in a single spectrum. This technique can resolve patterned features smaller than a micrometer with a molecular specificity unique to MS, allowing the detection and visualization of trace chemicals within very complex surfaces.

SIMS Ion Source Development The introduction of cluster sources such as C60 and argon giant cluster ion beams (GCIB) have remedied the excessive chemical damage generated by energetic ion bombardment to a surface. In addition to extending the achievable depth of analysis, these cluster sources offer enhanced desorption of large molecules, expanding SIMS to biological applications.

Ion mobility spectrometry (IMS) is widely used for national security and law enforcement, placed at key transportation checkpoints such as airports and border crossings for the trace detection of drugs and explosives. Its simplicity, ease of operation, portability, and rapid analytical performance provides a basis for its real-time screening capability.

IMS & IMS-MS employs a drift tube with an applied electric field to separate ionized molecules based on their mobility. The technique is robust, and is capable of differentiating a wide range of drug and explosive molecules. The coupling of an MS provides an additional level of separation that may be beneficial for the discrimination of a wider variety of ionized molecules.