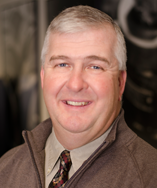 David Stieren is the Division Chief for Extension Services at NIST MEP.  He oversees a division that works with MEP Centers, U.S. manufacturers, NIST Laboratories, other government agencies, and other stakeholders to develop and deploy approaches that are used by the National Network of MEP Centers to provide extension services to U.S. manufacturers.  The NIST MEP Extension Services Division focus is the provision of National-level guidance and resources to MEP Centers as they provide technical and business assistance to U.S. manufacturers to help them grow and compete in the global marketplace.

Mr. Stieren is a mechanical engineer who has been at NIST MEP since 2007.  Prior to joining NIST MEP, he served for approximately 20 years in the NIST Laboratories as a research engineer, project manager, and program manager. Mr. Stieren has experience working with the manufacturing technologies, processes, systems, and supply chains operating in many industries of the U.S. manufacturing sector. Mr. Stieren’s professional experience has included details on the staff of the NIST Director and the staff of the Office of the Secretary of Defense in the Pentagon, as well as details at both the U.S. Department of Energy and the U.S. Small Business Administration.  Mr. Stieren served for over 5 years as the NIST MEP principal for a broad partnership with the U.S. Department of Transportation that leveraged the MEP National Network to improve and increase U.S. manufacturer participation in U.S. transportation-related supply chains.  He has also served as Executive Secretary of the National Science and Technology Council’s Interagency Working Group on Manufacturing R&D, and he represents NIST MEP in ongoing interagency initiatives focused on U.S. manufacturing supply chains.